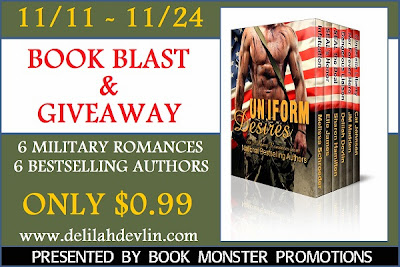 Six New York Times, USA Today and National Bestselling Authors combine their love of hot military romance, weaving tales of super alpha heroes and the women who love them. They love hard. They love intensely, like everything else in life they do. This is intended as a toe-curling, knee-wobbling read not for the faint of heart as we learn about heroes who put their lives on the line every day. 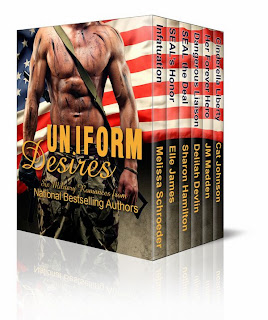 Infatuation by USA Today bestselling author Melissa Schroeder
To prove her love and save her man, she has to go above and beyond the call of duty

Cinderella Liberty by NY Times & USA Today bestselling author Cat Johnson
A weekend liberty leads to unexpected passion between a Marine and his best friend's sister, but he must survive seven months in Afghanistan to get back to her

ADD it to your shelves on GOODREADS 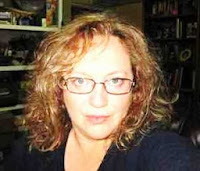 Until recently, award-winning romance author Delilah Devlin lived in South Texas at the intersection of two dry creeks, surrounded by sexy cowboys in Wranglers. These days, she’s missing the wide-open skies and starry nights but loving her dark forest in Central Arkansas, with its eccentric characters and isolation—the better to feed her hungry muse!

For Delilah, the greatest sin is driving between the lines, because it’s comfortable and safe. Her personal journey has taken her through one war and many countries, cultures, jobs, and relationships to bring her to the place where she is now—writing sexy adventures that hold more than a kernel of autobiography and often share a common thread of self-discovery and transformation.

From an early age, Melissa loved to read. First, it was the books her mother read to her including her two favorites, Winnie the Pooh and the Beatrix Potter books. She cut her preteen teeth on Trixie Belden and read and reviewed To Kill a Mockingbird in middle school. It wasn’t until she was in college that she tried to write her first stories, which were full of angst and pain, and really not that fun to read or write. After trying several different genres, she found romance in a Linda Howard book.

Since the publication of her first book in 2004, Melissa has had close to fifty romances published. She writes in genres from historical suspense to modern day erotic romance to futuristics and paranormals. Included in those releases is the bestselling Harmless series. In 2011, Melissa branched out into self-publishing with A Little Harmless Submission and the popular military spinoff, Infatuation: A Little Harmless Military Romance. Along the way she has garnered an epic nomination, a multitude of reviewer’s recommended reads, over five Capa nods from TRS, three nominations for AAD Bookies and regularly tops the best seller lists on Amazon and Barnes & Noble.

Since she spent her childhood as a military brat, Melissa swore never to marry military. But, as we all know, Fate has her way with mortals. She is married to an AF major and is raising her own brats, both human and canine. She spends her days giving in to her addiction to Twitter, counting down the days until her hubby retires, and cursing the military for always sticking them in a location that is filled with bugs big enough to eat her children. 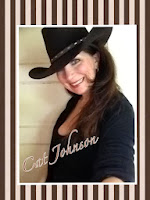 It all started in first grade when Cat Johnson won the essay contest at Hawthorne Elementary School and got to ride in the Chief of Police's car in the Memorial Day Parade...and the rest, as they say, is history. As an adult, Cat generally tries to stay out of police cars and is thrilled to be writing for a living. She has been published under a different name in the Young Adult genre, but released her first romance in 2006.

Dorchester Publishing released Elle’s first novel and 2004 Golden Heart Winner TO KISS A FROG in March of 2005. Since then, she’s contracted with Harlequin Enterprises Ltd to produce eleven Harlequin Intrigues between 2006-2009.

With the support of her parents, husband, one teenage child, two grown children and one grandchild, Elle is currently at home in Northwest Arkansas happily writing her next edge-of-the-seat suspense.

Or visit her alter-ego Myla Jackson at mylajackson.com

Sharon’s award-winning almost-erotic Navy SEAL stories of the SEAL Brotherhood, have consistently made best sellers lists and review sites. Her characters follow a spicy road to redemption through passion and true love.

Her Golden Vampires of Tuscany are not like any vamps you’ve read before, since they don’t have to go to ground and can walk around in the full light of the sun.

Her Guardian Angels struggle with the human charges they are sent to save, often escaping their vanilla world of Heaven for the brief human one. You won’t find any of these beings in any Sunday school class.
She lives in Sonoma County, California with her husband, and two Dobermans. A lifelong organic gardener, when she’s not writing, she’s getting vera vera dirty in the mud, or wandering Farmer’s Markets looking for new Heirloom varieties of vegetables and flowers.. 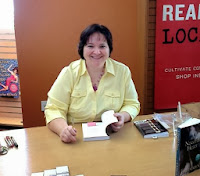 I don't like to talk about myself so this will be short and sweet.

I am a wife and mother of two. I currently stay home to take care of the farm and family, which I love. I was a deputy sheriff in Ohio for nine years, and I found myself tapping that experience as I wrote Second Time Around. No, I didn't tackle and cuff my husband, although there was that time in K-mart... Anyway, it was quite a change going from writing technical reports with diagrams, witness statements, inventories etc that would stand up in court to writing contemporary romance. I've always written, though, and it was always a dream to do something with that huge, leaning stack of spiral-bound notebooks.

Second Time Around was my first release, and Love on the Line is my eighth. I thank you so much for taking an interest in my work...

a Rafflecopter giveaway
Posted by Unknown