Charlene sets her copy of Dark Liaison on the coffee table and then turns off the light. Pausing, she recalls the last time the stars of the Ema Marx series came for a visit and she tried to accommodate their light-sensitive eyes. The potted plant almost didn’t survive due to her poor memory of the layout of her own living room. Thanks to Jesu’s quick reflexes, the table and greenery were upright before she could reach for them.

She opted for a compromise and dimmed the lights to a soft glow as a knock came at the entry. A smile stretched across her face and she swung the door wide.

Jesu and Ema stand hand-in-hand. Jesu, wearing his signature black on black, smiles politely, the left corner of his mouth lifting into a soft dimple. Ema blinks a few times in attempt to dispel the artificial light. She gives up with a sigh and then plasters a huge grin on her face while stepping past the threshold and wrapping her arms around her old friend.

Charlene: *Throws her arms around Ema. Her lungs hitch as she tries to breath under her vampyre friend’s strong hold. Giving up on sucking in air, her voice squeaks as she pushes it out.* Jesu, Ema, it’s so good to have you back.

Ema: *easing back from the bear hug to let Charlene breath* It’s so good to see you again, Charlene!

Charlene: *snatches a quick gasp to respond* It’s so good to see you! Do come in.

Jesu: We brought you a souvenir from Berlin. *Hands Charlene a gift basket. Nestled inside is a stationary set with vintage prints of the Brandenburg Gate.*

Charlene: *Lips pucker into a large O* Oh, thank you! This is beautiful.

Ema: I told him no one writes on paper anymore, but he insisted.

Ema: And paper is prone to tearing. And coffee stains. And it’s highly allergic to fire.

Charlene: *imagines the pretty pieces of paper teeter-tottering on their corners as they run sneezing from the flames* Hahaha, it’s perfect. *heads to the kitchen* What can I get you to drink?  I understand you’re able to handle being around blood a little better now, Ema.

Ema: Around it, yes. But I better not drink any just now.

Jesu: *smiles* You needn’t trouble yourself with securing blood for us. We ‘ate’ before we came over.

Charlene: Oh, well then make yourselves comfortable. *Picks up her book from the coffee table and settles into her chair across from them* I’m anxious to talk to you guys about book two, Dark Liaison! I hear you have quite a tour going on.

Ema: Yes, J.D. has us working like circus elephants! She has a whole list of blog stops scheduled through the month. It’s posted on her website.

Jesu: There’s a lot of anticipation this time around. Our fans have been waiting for months to see how our journey develops.

Charlene: Yes, a lot of anticipation. Dark Heirloom was fantastic! So, tell us. How’s the training going?

Charlene: But don’t you have a new trainer?

Ema: Yeah, that new trainer? Turns out her attention was really on someone else. *Narrows her eyes at Jesu*

Jesu: I’ve apologized for that a hundred times and I will apologize a hundred more, a thousand more, a million more, until you believe it. Ema, I am so very sorry…

Ema: *Raising a hand to ward off Jesu’s theatrics* Save it. I’ve already accepted your apologies.

Jesu: That is not the same as truly believing. I will earn your trust back.

Charlene: Oh, Ema, how could you hold back from such an amazing guy?

Ema: *Rolls her eyes at Jesu* Like there is anyone I trust more than you already. *Snorts and looks at Charlene* He might be amazing, but he’s not always honest.

Jesu: A million times I will apologize, and then a trillion more—

Charlene: *Grins and leans toward Jesu*  Any luck getting hold of Ema’s heart? I mean, really?

Jesu: *Looks at Ema and lifts his brow*

Ema: *Laughing* Oh, yeah, it’s his all right. And you won’t believe the things he does with it.

Charlene: *Blinks, unsure if she really wants to know what those things are. Decides to take a little bit safer route and quirks an eye at Ema’s hand* I know Apolyon isn’t wasting time... Um... Tell me about it?

Ema: *Follows Charlene’s line of sight to the thin pale-pink scar ringing her finger and then groans* Apollyon is a pain in my ass. Can you believe it? First his zombie thug bites my finger off, then Apollyon sews a new one on! Don’t even ask me where he got a new finger. I mean, what? He shops at a human body parts store? Like Ace Body-ware?  And what’s the point? I mean, was that his sadistic way of saying, “Oops, sorry my jack-ass minion bit you”? It’s not like he doesn’t want me dead anyways.

Charlene: He gave you a new finger? It’s hard to imagine him wanting to make up for anything. *Mumbles in contemplation* He’s got to have ulterior motives. I’m so glad you have King Nikolas on your side.

Jesu: *Looking a bit green, he sinks a little lower in his seat*

Charlene: *Notices the she stepped into a touchy subject and decides to shift the comment* Er... What’s it like staying at an ancient Vampyre king’s castle?

Ema: Oh, you know. Dark. Dank. Kind of like you hitched a ride on a time machine. It’s cool, though. I never thought I’d live anywhere other than the slums of Chicago. Suddenly I’m living among royalty. Vampyre royalty, but still.

Jesu: Nikolas’ estate is much larger than our home in Finland. Every time he and his wife had a child, or when their children had children, they added another wing.

Charlene: Wow. And I thought Prince Jalmari was excessive. By the way, have you heard from him at all?

Jesu: *Ignoring Ema’s comment* He must be grieving pretty deeply.

Charlene:  Yeah, I know he really loved Leena. I hope he doesn’t go off the deep end.

Jesu: *Frowning* I worry for my brother. He is not always…stable.

Charlene: Okay, let’s lighten the mood. Dark Liaison is out! Woo to a double Hoo! Would you share an excerpt? 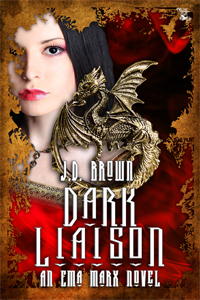 Charlene: It’s wonderful to hear about how your story is continuing.

As Charlene sets her book on the table, Ema and Jesu stand. She meets them near the door and throws her arms around them both.

Charlene: Thank you so much for coming all that way to visit with me.

Ema: Let’s not wait so long to do this again, okay?!

Jesu: Indeed. Don’t be a stranger, Charlene. Call on us any time.

Charlene closes the door and pinches her lips between her teeth as she picks up the basket of beautiful stationary. She squinches her nose and leans close to the pretty pages. “Don’t you worry, little guys. I have plenty of flameproof antihistamine to protect you from those fire allergies.

J.D. is offering a special giveaway for Charlene Blogs readers!


Available formats include .Mobi (for Kindle), .Epub (for all other e-readers), and .Pdf (for computers). We’ve added ways to rack up more entries in the Rafflecopter below. So, have fun and Good Luck!

Here’s a little bit about each book:

Dark Heirloom (An Ema Marx Novel 1)
She wasn’t bitten. She’s not undead. So how did Ema Marx become a vampire?

“You’re a vampire” is so not what Ema Marx wants to hear when she wakes from a two-day coma in a cryptic yet exquisite castle in northern Finland. Unfortunately, it explains a lot. Like why she’s able to see in the dark and walk through solid objects. What she doesn’t understand is why the other vampires expect her to have all the answers. It’s their fault she turned into one of them…right?
Jalmari’s hatred for his old-man intensifies when he’s ordered to bring that troublesome girl to their castle. He has a clan to run, there’s no time for babysitting newborn vampires no matter how they were converted to their culture. But when a two-thousand-year-old premonition threatens to take the crown and his life, Jalmari sees no other choice than to take out the catalyst. Ema Marx. Fortunately for Ema, she could also be the clan’s only savior.
The race to figure out her vampiric origins is on. And maybe she’ll get the hang of the blood-drinking gig along the way…

Dark Liaison (An Ema Marx Novel 2)
Being a Romani-Vampyre with an ancestor who wants you dead isn’t normal. Neither is this sequel.

Ema Marx wishes her life would go back to normal, but there’s nothing normal about being a Romani-Vampyre with an ancestor who wants you dead. Apollyon is back, wreaking havoc on the lives of everyone she cares about while plotting her demise.
Ema thought she would find a new best friend in her trainer, Bridget, until the exotic vampire vies for Jesu’s attention. Jesu can date who he wants, right? Ema has more important things to worry about, like honing her powers. When Apollyon’s thugs appear out of the shadows to attack her, Ema knows it’s time to take action. But everyone else has other plans in mind.
One thing is for certain, being under house arrest in the German vampyre king’s castle was not part of her plan to save the day. 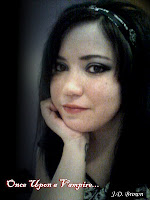 Author J.D. Brown writes Urban Fantasy for MuseItUp Publishing, as well as a monthly “how-to” newsletter column for PDMI Freelance Publishing. She graduated from The International Academy of Design and Technology with a Bachelor Degree in Fine Arts and currently lives in Wisconsin with her two Pomeranians. J.D. loves paranormal characters; from vampires and werewolves, demons and angels, to witches and ghost. She is a self-proclaimed expert in vampire and Greek mythology. Her writings are often a combination of suspense and romance. J.D. enjoys helping her fellow writers and interacting with her fans and leads an active life on the web.


Winners will be chosen by Random.com and posted on Saturday, June 29th, 2013.

Good Luck!
By entering you state that you are 18 years of age or older. Void where prohibited by law.

Really great interview.:-) I wish you tons of success.

That was a great interview! Your characters AND your stories sound fabulous!

Hi Charlene! Thanks again for having Ema and Jesu on your blog today. :)

Kat, thanks so much, sweetie, you too!

Penny, thank you! Good luck with the giveaway, both of you.

It's great to have Jesu and Ema here again, JD. I love interviewing your characters! :)

Hi, Kat. Thanks for dropping by. I always enjoy conducting character interviews. They're so fun. :) And JD's are so real

Thanks, Penny. I Love the Dark Heirloom characters. JD really brings them to life. Good luck in the drawing. :)

I think I would like to be a vampire, though I'm not sure about the immortality & the blood. Okay - need a re-think.

I think I'd like to be an ass kicking, intelligent lady vamp who fights for the good guys :D

Lol, Mary. I think I'd like to be a witch or something that doesn't require drinking blood, myself. Or maybe a shapeshifter?

Thanks for stopping by bn!