April A-Z V is for Vietnam

Today I have a special guest post by multi-published author, Toni V. Sweeney.  I'm always thrilled to have Toni participate in my presentations.  I love her wit, cleaver characters, amazing plots, and...well, you get my point.


Thank you so much for being here today, Toni.  I'll hand it over to you.

I'd like to thank Charlene for letting me hog so much blog-space lately.  However, instead of me talking about my upcoming novel, Jericho Road  (written by my alter ego, Icy Snow Blackstone and set for an late summer release by Class Act Books), I’ve invited the hero of the piece to say a few words about his part in the story.  I don’t write many contemporary romances and I certainly don’t concentrate on Vietnam when I do.  I still have no explanation for why I chose to write this particular novel, except that suddenly it popped into my head, and refused to leave until I told the story of the inhabitants of Jericho Road.
So, without further ado (as the Ringmaster always says), Ladies (and any Gents out there) may I introduce Logan Redhawk, lately of upper New York State, now living in Sardis Crossing, GA..  Logan, it's all yours...

Okay, I'll start off by getting the necessaries out of the way.  I'm Logan Redhawk—Doctor Logan Redhawk, OB/GYN—assigned to Temple General Hospital in Sardis Crossing, Georgia, as part of my obligation to pay off the Fredericks Loan which put me through medical school.  I'm part Mohawk, and I've walked a chalk line because of that all my life, so please excuse me if I'm just a little belligerent.  My parents think I should choose one race or the other to be accepted but—dumb me—I want to be a part of both.  As a result, I’ve a humongous chip on my shoulder.  You see, all my life, I've been treated like some kind of freak.  When I was in college, my roommate cut off my braids while I slept.  White women seem to think I'm some kind of sexual trophy.  And being assigned to a small-town hospital in the middle of White Supremacy Alley hasn't exactly been a stroll through the park.  Sometimes I wonder what bureaucratic idiot would send a halfbreed to such a bigoted place—or if he even cared.

That all changed the night I met Lindsey Sue Conyers.  She'd been in an auto accident (her date "couldn't hold his likker"), and I was the doctor on call.  I couldn't believe this diminutive little creature was an adult!  She was so tiny, with that wonderful strawberry-blonde hair falling over her face and those big green eyes, though one was black-and-blue at that moment.  Believe me, it really shook me up that I felt such an immediate attraction to her.  But she's an adult all right, and if her response was any indication, she felt the same attraction.  She's a little younger than I—twenty-two to my twenty-eight but I don't think that matters.  The best thing is...Lindsey accepts me for what I am, didn't even know I was a man of two races, in fact.  Guess that made me love her even more.

Since I'm a gentleman, in spite of being a damnYankee, I won't tell the details about our first date.  Let's just say I went into it with preconceptions about Southern women—gained, I admit, from television and movies, especially Gone with the Wind—and found they were totally wrong.  Nearly loused up our whole relationship before it even got started, and my life as well, if her Daddy had gotten wind of it!  Before the night was over, however, Lindsey and I were set on the course that would take us through the rest of our lives.

All in all, Lindsey's family has accepted me.  Lindsey's brother Wade just got back from Vietnam and he's going through some bad times, I've heard.  Still, he's a good guy and I'm hoping he comes out all right.  There seem to be some problems in his relationship with his new wife but I haven't pried.  It's not really my business, since I'm not a member of the family...yet.  Her younger brother Heath, is a good kid, too, if a little too eager to "become a man."  I'm beginning to wonder if I should offer him some advice in that department, tell him that being a man means more than just how many women you can maneuver into bed.  My one obstacle in that little household is Daddy Conyers... Wade Hampton Conyers, III, or as his friend call him, “Hamp.”  The man's about as Old South as you can get.  He practically bristles at mention of my name.  And then there are those guys in black hoods who showed up on my lawn one night, armed with torches and shotguns...

When I came to Sardis Crossing, my father told me it was my Rite of Passage, my Mohawk Ritual of Manhood.  Wonder if Dad had any idea this was one ritual I might not survive? 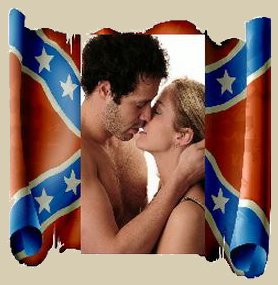 Lindsey looked up at him.  "Is it true that your mother's folks don't speak to her just because she married an Indian?"

"Of course not, and it’s Native American," he corrected gently, "not Indian."

"What's the difference?"
"A lot!  Indians are from India.  The people of the Six Nations aren't.”

"The Six Nations.  Is that what they call themselves?"

"That's what we call ourselves.  We’re the Kanienhehaka."

He expected her to make some other comment, about his siding himself with just one people when he was part of both but instead, she shrugged and looked at the photo again and said, "Well, I think it would be a stupid way to act!  Why, I'd be proud if someone in my family married an Ind—a Native American.  Or if I were mar—"

She stopped and looked up at him and blushed slightly, "I mean—" and stopped again.

Neither of them said anything, just stood there, looking at each other.

He was standing too close to her, ought to move away.  He could see the quick rise and fall of the tiny breasts, realized that one hand was brushing her hip.  He looked down at her, thinking how utterly small and innocent she looked.

"Well?" Lindsey said softly.  "Aren't you going to kiss me?"

“You’ve been wanting to do it for about three hours now, haven’t you?”

He put his arms around her, pulling her slight body against his, almost lifting her off the floor.  He felt her rise onto tiptoe and waver toward him before she regained her balance and then the slender arms were around his neck and she was pressing against him, mouth touching his in a very childish, very chaste closed-lip kiss.

He pulled away long enough to mutter, "Lindsey, maybe we'd better—" and she touched his cheek and whispered, "Shh—" and he kissed her again, thrusting his tongue against her lips, feeling them part and welcome his invasion eagerly.

One hand moved to touch one tiny breast, feeling the nipple quiver into tautness against his fingers.  She made a little protesting sound and raised her hand to push against his wrist but as it met resistance let it drop again.  Gently, Logan's fingers encircled the soft little mound.

He couldn't know what she was thinking, that abruptly, Lindsey realized that here was a man and not one of those silly awkward boys who were all gropings and heavy breathing.  Here was someone who knew exactly what he was doing and what he wanted was her.  She knew she ought to stop him—she could stop him with one word—but his hands felt so good touching her, making hot little shivers generate inside her in places she'd never felt them before.

Just a little longer, she thought.  I'll let him touch me just a little longer and then I'll tell him to stop.  But she never said the words, not even when Logan picked her up and without taking his mouth from hers, carried her into the bedroom.

(Jericho Road is scheduled for release in early Summer by Class Act Books.)
More about Toni and Icy Snow can be found at:

Visit the other A-Z blogs!  You can find the entire list of participating blogs by clicking  HERE or you can click on the A to Z images to go to the official A to Z blog site.

I’m running a contest through the A-Z blog hop!

You can enter by using the Rafflecopter below.  The form not only allows you to enter the drawing, it gives you several ways to earn more than one entry.  Enter each day if you wish.

All entrants must be 18 years or older.

Three winners will be chosen at random, using Random.com.

Once the winners are chosen, I will notify them and contact the respective authors.  Your email will only be shared with the authors to allow them to send you your prize.  Each author generously provided their work for you to enjoy.  I do not own these books.


On that note, I'd like to thank each of the authors that donated titles for this contest.  Without you, I couldn't have offered such a wonderful giveaway!

Until next time, may your dreams be magical.
Charlene


.
Posted by Charlene A. Wilson

Thanks for stopping by, Kate. It's great to meet you. :)