Today I have the pleasure of announcing the release of one of my best friend's debut novel, Cleanse Fire.  It's book one in the Kinir Elite Chronicles.  Anastasia V. Pergakis is busy promoting but I love character chats and am more than happy to have the hero of the Chronicles, Captain Derac Vidor, over for a visit.
Derac, welcome! Come in, have a seat.
Hello Charlene. Thanks for having me. 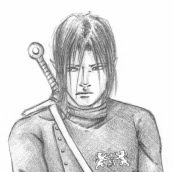 Complete the mission, no matter what…
Captain Derac Vidor has served Kinir for nearly twenty years. It’s his life, his blood, his soul. And then his Commander betrays everything Derac holds dear. Now he has to focus on his own life and his team instead of saving the citizens of Kinir.
Treason is only the beginning…
Fueled by rage, the team chases the source to their Commander’s betrayal – a powerful wizard bent on revenge. The wizard seeks to destroy the Kinir Elite, in both mind and body. No place is safe, even among their allies.
The past holds the key…
Derac’s tragic past may be the key to saving the team. But can he face the gruesome nightmare in time?