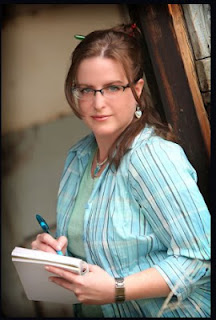 Today I have a special guest post to share by S.M. Blooding.  I know S.M. as Frankie and met her at the online writing community, Writing.com, several years ago.  Now, she's traveling the World Wide Web with the release of her new novel, Demon are Jackasses, from her Demon Talker series.  As you can tell by the name of the book, she’s a hoot!   Energetic and such a fun person.  She interviewed her leading male character, Dexx Coulter, and I'll will turn the time over to her.

Hey, folks! Frankie here, promoting the new release, Demons Are Jackasses, and with me today is the demon hunter in the series, Dexx Coulter.

So, Dexx, what can you tell us about the book?

Thanks, Dexx. *eye roll* We’re trying to entice people to read it.

*snorting shrug* Then you tell them about the book.

Oh, fine! Okay, well, um, *turns to audience* when I first wrote the story, Dexx wasn’t in there and Paige didn’t do well. At all.  As a matter of fact, we were very close to losing the war and the earth was about to come to an end as we know it. While that might be interesting, it wasn’t the series I saw in my mind. I said to myself, “Self, what does Paige need in order to do better?”

*shoots sexy grin to the audience*

I decided that what Paige needed was someone who could pull her head from her butt on a regular basis and keep her grounded.

I added Dexx and he just kind of took over the story.

Eh! Paige was a mess! She was possessed and getting dumber by the minute. I just did what I had to.

*turns wide-eyed stare to the audience* Oh, and he did. And it turns out that he was exactly what Paige needed…well, needs.

Well, I guess, you know, if you like Supernatural—

Which came out AFTER I’d completed the 25th draft of Demons Are Jackasses, btw!

*smiling snort* —and if you like ghost stories, murder mysteries, exorcisms and a little humor, then you should definitely read this book.

Oh, there is some definite humor.

With Fanny in there?

This isn’t your typical paranormal read. Paige and I don’t have sex, for one thing.

*sigh* And there are no vampires, sparkly or otherwise.

Will the jokes never stop on that one?

*shakes head* We also have cooler things than werewolves.

Oh, but weres are HOT, Dexx!

How is a hairy, psycho-warping creature that just changes at the drop of a hat, trying to claw your face off hot?

*dead pan stare* Only you would go there. Let me find you a were with boobs and you’ll change your mind.

Keep thinking that, Frankie. Anyway, I really do think that once you get into the first book, you’ll enjoy the rest of the series. So, buy the book, borrow it, beat Frankie for it—

—however you need to get it, read it and I’m pretty sure you’ll enjoy it!

*rolls eyes and shakes head, turning to audience* Well, there you have it. A sneak peak at Demons Are Jackasses through Dexx’s eyes. LOL!! I hope you enjoyed this interview! Have a lovely day and I hope to see your review and/or comments in my Tweet Feed.

St. Francisville used to be a quiet place. Until three bodies turn up dead with spells carved into their skin. Someone in Louisiana is ritualistically killing people to capture the attention of Detective Paige Ansley. Having earned her title through her knowledge of the occult, she’s the only witch detective that can get to the bottom of these serial murders. Only, there’s one problem. Paige can’t seem to remember anything that happened during the past five years.

With the help of Dexx, a snarky yet incredibly sexy demon hunter, she begins to remember pieces of her past. After discovering she has the gift of communicating with both demons and angels, the murder investigation takes a much more personal turn. The killer is after a demon’s soul, and who better to get that for him than the demon talker? But after Paige is kidnapped, drugged, and cast upon, she finds herself on the short side of possessed. Even after the demon is exorcised, her gift of demon talking is compromised. Any demon who steps within a hundred foot radius is drawn into her, pushing her soul out.

Paige is determined to get to the bottom of this demonic case so she can return home. But the killer is still on the loose, and he’s short a demonic soul. In order for her to save herself, banish the murderer, and save Dexx, she must decide if she’s willing to give up the one thing that can hold everything together. And bring the quiet back to St. Francisville.

A gutteral roar filled the room as Dexx slammed the door shut.
He walked over to Paige.
Her lips curled. “You do not vant to get in my way, little man.”
Dexx raised his fist and slammed it into her face.
Her eyes shot open with surprise before her head slumped forward, her chest rising and falling in sleep.
Dexx sat down on the edge of the bed after he maneuvered her onto it, grabbing his flask of holy water out of his bag. He opened her hand and poured some into her palm.
Nothing happened.
He recapped his flask and grabbed a ball point pen. So the demon hadn’t gotten in. That was a plus, but with her gift, he wasn’t taking any chances. He pulled out his phone and hit the number two on his speed dial, taking Paige’s hand and setting in his lap.
“Hey, Dexx.” Leslie said, her voice full of laughter. “No, Amanda. Please, I’m on the phone.” Dexx could hear the girl in the background, but couldn’t make out what she was saying. “Later,” Leslie said firmly.
“Okay. Sorry about that. What’s up?”
“It’s a demon,” he said softly as he outlined a protection rune into Paige’s skin.
“What happened?” Leslie asked, giving him her full attention. “Is she okay?”
“For now,” he said, staring at Paige. “But I don’t know for how much longer.”
“Okay. Where is she? What happened? Did she summon?”
“No.”
“Then what happened?”
He started to fill in the outlines of the rune. “Les, who else knows about her gift?”
“No one outside of the family.”
“I know.”
“You’re family. Dexx, what’s—”
“There was a trap spell.”
Silence. “It could have been for anyone.”
“This guy kills three people in the span of three weeks and then once she gets here, he does nothing?” He took in a deep breath. “And Leah’s involved somehow.”
“What? How?”
“She only said that he used Leah.”
“Is she starting to remember?”
“Damn it.” Dexx’s lips formed a firm line. “Les, why didn’t you take the memory blockers down years ago?
Do you realize how open for attack she is right now?”
“Do not blame this on me. I did. Before she moved.” She took in a deep breath. “She wouldn’t deal with it, like before. I was afraid she’d do what she did last time. She was actually worse than before. All that anger and grief.”
“How would you feel to wake up and find out that your daughter was taken from you for no good reason, and that her own family had blocked her memories and her gift?”
“She was calling demons to kill people, Dexx,” Leslie said.
“To kill one person.”
“Yeah. My mother.”

When you buy an autographed copy of Demons Are Jackasses, you’ll also receive a demon doll!

About the author:
SM Blooding lives in Colorado with her pet rock, Rockie and Mr. Bird, who’s a real bird. She likes to hike the beautiful Rocky Mountains, and is learning to play the piano and guitar. Currently, she’s trying to MURDER them both.

THANK YOU!!! Your blog is so beautiful!!! *grin* I can't thank you enough for letting us stop by! LOL!

Love Dexx's responses. I haven't read the book yet but I believe I'll enjoy it immensely! Great interview! I was chuckling at Frankie's "@_@ REALLY?!".

I hope you enjoy the book! I can't wait to hear what you think!!! And as far as which book to start with? Ooohhh, I'd say Demons! Then Dustman. LOL! Maybe the other way. I don't know.

It's wonderful to have you here, Frankie. You're such a doll. :)