Interview With Lyra and Cullen, Stars Of Seeking A Scribe

Get out your wizard hats and call all your magical animal friends around, cause I have a treat that will tickle your Fantasy fancy!  The stars of Seeking a Scribe are coming for a visit to tell us about a world that could only be created by Fantasy Romance Author Marsha A. Moore. 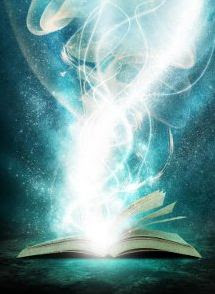 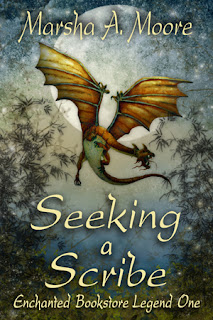 Seeking a Scribe
Lyra McCauley is a writer and loves fantasy novels, but until she opens a selection from bookstore owner Cullen Drake, she has no idea he’s a wizard character who lives a double life inside that volume…or the story’s magic will compel her from the edge of depression to adventure, danger, and love.
His gift to Lyra, the Book of Dragonspeir, was actually her copy, misplaced years ago. Lost in her pain following divorce and death, she fails to recognize him as her childhood playmate from the fantasyland. Friendship builds anew. Attraction sparks. But Lyra doubts whether a wizard is capable of love. She’s torn—should she protect her fragile heart or risk new love?
Opening the book’s cover, she confronts a quest: save Dragonspeir from destruction by the Black Dragon before he utilizes power of August’s red moon to expand his strength and overthrow the opposing Imperial Dragon. Lyra accepts the challenge, fearing Cullen will perish if evil wins. Along with magical animal guides, Cullen helps her through many perils, but ultimately Lyra must use her own power…and time is running out.
Purchase at Amazon for only 99 cents! 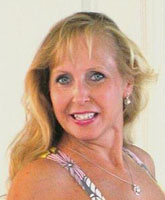 Marsha A. Moore is a writer of fantasy romance. The magic of art and nature spark life into her writing. Her creativity also spills into watercolor painting and drawing. After a move from Toledo to Tampa in 2008, she’s happily transforming into a Floridian, in love with the outdoors. Crazy about cycling, she usually passes the 1,000 mile mark yearly. She is learning kayaking and already addicted. She’s been a yoga enthusiast for over a decade and that spiritual quest helps her explore the mystical side of fantasy. She never has enough days spent at the beach, usually scribbling away at new stories with toes wiggling in the sand. Every day at the beach is magical!
She'd love to connect with you:
Website: http://MarshaAMoore.com
Twitter: http://twitter.com/MarshaAMoore
Facebook: http://www.facebook.com/marshaamooreauthorpage
Fantasy Faction staff page: http://fantasy-faction.com/staff-members?uid=38
Goodreads author page: http://www.goodreads.com/marshaamoore
Google +: https://plus.google.com/u/0/100564214132835514192/posts

Charlene, it sounds like your tea went well. I hope Cullen didn't enchant your drinks too much. He can overdo it sometimes!

Mmm! I enjoyed every magical sip and every single memory they conjured.

I had a wonderful time with them. I look forward to having them again when the next book comes out.